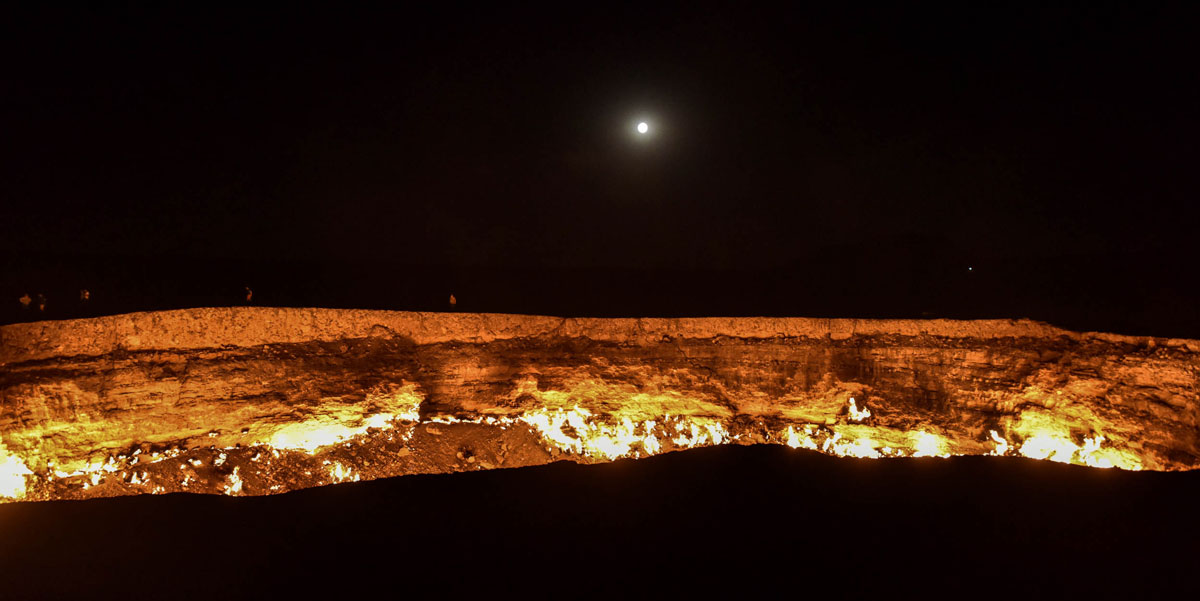 Turkmenistan – A land of fire due to its unbelievable crater, Ashgabat, oasis-cities from the Silk Road times, Turkmenistan has a lot to offer. Whether traveling by yourself or with a of group of friends, get off the beaten tracks to venture into this amazing country.

The sun rises over a country once in the hands of the Persian empire, conquered by Alexander the Great, and sitting on the Silk Road. With its millennial history, nomadic culture and cities of the desert, it has as much to offer as any of its neighboring countries of central Asia.

Being little exposed to tourism, Turkmenistan is remaining a mysterious place which will grant a lot to any visitor willing to discover its heritage. It has amazing landscapes, oases, ancient and modern cities, and incredible archaeological sites.

Ashgabat, “the city of love”, is full of flowering parks, architectural masterpieces, sculptures, fountains, monuments and museums holding treasures from the Turkmen and Soviet times.

Its modern style comes from its reconstruction following the 1948 earthquake. Since then, the capital has adorned itself with white marble buildings, tall residential towers and unusual monuments: The top of the Arch of Neutrality is covered with a golden statue of Turkmenbashi, and the presidential palace located in the Independence Square shines with a golden dome. Among the many mosques, the Azadi (or Ertugrul Gazi) is worth a visit. On Sundays, the Tolkuchka bazaar is a great place to hunt for special souvenirs from all the regions.

Turkmenistan is famous for its carpets. Ashgabat’s impressive collection includes pieces from the 17th century, including the largest carpet in the world, nearly 400 sqm. and weighing over a ton.

The National Museum of History and Ethnography is as interesting. It holds a splendid collection of ancient coins collected throughout the whole country, as well as remains from the Old Nissa city.

Nissa is close to Achgabad. Ancient capital of the Parthian empire (2nd century B.C), its fortress is listed a UNESCO World Heritage. A truly splendid gem, it attracts worldwide archeologists and historians. Gonur-Dépé, the legendary Margush capital, is one of the most famous sites from the Bronze Age (2300-1600 BC). It shelters ruins of fortresses and temples, as well as a necropolis from the 3rd millennium B.C.

Merv, the oldest city on the Silk Road, is a dream place for ancient cultures and civilizations fans. Listed a UNESCO World Heritage site, it has been the home to five different antique cities. Its most majestic monument is Sultan Sandjar’s mausoleum which has an a very nice legend attached to its origin. The Abdullahan-Kala fortress, formerly surrounded with huge moats, is one of a kind.

Another UNESCO World Heritage jewel is Kunya-Urguentch, a capital city in the times of Shah Kharezm's empire. The 15th century Turabeg-khanum mausoleum, the 11-14th century Kutlug Timur minaret - its 60 m make it the highest of all medieval minarets in central Asia, and the Arslan mausoleum- the founder of the Kharezm pre-Mongol empire, are among its gems.

The Karakum desert (“black sands”) covers over half of the country. It is characterized by “takyrs”, large ditches surrounded by sand dunes.

Once the home of a bronze age civilization in the 3rd millennium B.C, it is still to this day inhabited by Tekes, a tribe who has been raising the Akhal-Tekes renowned horse breed for over 3000 years.

Despite the desert’s harsh weather conditions, oases cities such as Tejen could still bloom. The Karakum desert soil is also full of natural gas. Its famous Darvaza crater, nicknamed “Door to Hell” appeared following an incident during a drilling in 1971. Its gas has been continuously burning since, creating a spectacular scenery.

Welcome to Turkmenistan, land of the many contrasts.